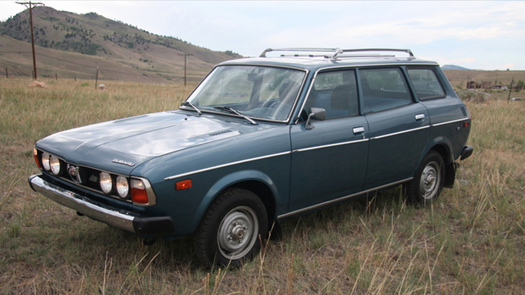 Scott’s Comment: We’ve come a long way.. I owned a 79 DL station wagon (same body style as this)  for about a year and a half that I eventually sold to a buddy for $300.00. Truly rusty but trusty at that point, the driver’s foot well filled with water every time it was wet due to a hole in the front wheel well. But it went through everything I could throw at it and then some. It had character..now considering that these were in the neighborhood of $5 to $6K new, they haven’t depreciated too much over 35 years now, have they?

Old Subarus of every stripe are a little more common in places where Subaru sold a lot of them — most notably the Pacific Northwest and in Colorado, where I live. Nevertheless, rust has killed most of the older ones. Imagine my surprise when I found one hidden on the back lot at Super Rupair, Boulder, Colorado’s thriving independent, you guessed it, Subaru repair shop. I didn’t spot it myself, but stumbled across it on an online forum and figured that since it was in my own backyard, I’d better go have a look.

2024 Subaru Impreza RS May Be Worth The Wait

Although the new 2024 Subaru Impreza hatchback may look pretty similar to the outgoing model, there are some noteworthy changes… Read More →

The Subaru Baja Was a Blast

Passenger car? Pickup truck? On this week’s Jalopinions, Andy and Steve get to the bottom of this conundrum. Read More →