Subaru Ascent enthusiasts are encouraged to vote for the SUV as part of the Indiana Chamber of Commerce’s first Coolest Thing Made in Indiana competition. Voting for round one is now open at indianachamber.com/coolestthing. Exclusively manufactured in Lafayette, the Ascent is Subaru’s largest and most versatile vehicle ever. Since beginning production at SIA on May 7, 2018, more than 262,000 Ascent vehicles have been built. Read More →

Before ex-bicycle racer Lance Armstrong worked for Nissan, he signed a $12 million deal to pitch Subarus. Soon after, Armstrong appeared in this magazine advertisement for the L.L. Bean Edition Legacy Outback wagon. The 2001 Outback (technically still a Legacy Outback at that point, though you wouldn’t find the Legacy name outside of the owner’s manual) was the first to get the upscale L.L. Bean treatment, and the L.L. Bean Edition remained available through the… Read More →

Zacks Investment Research upgraded shares of Subaru (OTCMKTS:FUJHY) from a hold rating to a buy rating in a report released on Wednesday morning, Zacks.com reports. They currently have $10.00 price objective on the stock. According to Zacks, “Subaru Corp. manufactures and distributes automobile products. The Company’s Automobile segment manufactures and sells vehicles and related products. Aerospace segment manufactures aircrafts, parts of space-related devices. Subaru Corp., formerly known as Fuji Heavy Industries Ltd., is based in… Read More →

Prodrive Hunter T1+: Exclusive details of ‘Ferrari of the desert’

Prodrive is putting the finishing touches to the first road-going version of its latest Bahraini-backed Dakar Rally car, the BRX Hunter T1+, and intends to have it ready to drive through Jeddah, Saudi Arabia, to coincide with the start of the 2022 event. Prodrive chairman David Richards has previously described the road-going Hunter T1 as “the Ferrari of the desert” and has created the vehicle to be the fastest cross-country production car in the world.… Read More →

Subaru’s retooled 2022 WRX sticks close to the company’s established rally-car formula, with advancements in performance and technology. We’ve collected some reviews. “Side-by-side, the new WRX definitely looks sharper than the outgoing car –- if by just a smidge. Aggressive C-shaped headlights and a hexagonal grille line the front end, with the cleaner backside sporting what Subaru calls ‘Magma’ taillights and a subtle lip spoiler. And there’s a ton of cladding … like, a lot. Read More →

Many a Subaru fan has been waiting for a more rugged off-road version of the Outback. Hardcore enthusiasts have been fettling their cars for years but the average Subaru Outback buyer, one that ventures off-road more than most, would probably like something more off the shelf. Enter the 2022 Subaru Outback Wilderness meant for those that want to adventure further. It’s an odd name since the Outback in Australia is essentially a wilderness, it’s a… Read More → 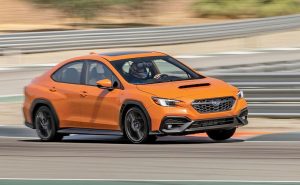 The WRX might be powered by a new 2.4-liter boxer engine generating 271-hp but the next generation WRX STI, due out next autumn, will up the ante considerably. Targeting the Mercedes-AMG A45 S’s class-topping 416-hp, Subaru engineers will take that 2.4-liter turbo, add a larger turbine and intercooler, reinforce the engine’s internals with bespoke pistons and conrods, remap the ECU and fit a special exhaust system. Read More →

Subaru EJ: The Four-Cylinder Boxer That Punched Above Its Weight and Became Legendary

Scott’s comments: A nice primer on the EJ Series motors. Developed from scratch during the second part of the 1980s as a replacement for the EA flat-fours, which had been produced since 1966, the EJ hit the streets in 1989 when the first-generation Legacy was introduced. At first, the engine codenamed EJ20 displaced 2.0 liters and was available in three distinct versions: a 123-hp single overhead cam, 148-hp dual overhead cam, and a turbocharged dual… Read More →

With only a teasing picture and a brief sentence, Subaru shows its electrified future isn’t just EV SUVs like the Solterra. The Japanese brand isn’t backing down from making enthusiast-centric, high-performance vehicles like the 2022 Subaru WRX STI in the EV era, and this new concept for the 2022 Tokyo Auto Salon—the STI E-RA—is proof of that. Read More →