Only three short, cold winter months after the end of a successful 2015 championship season CPD Racing USA is headed to SnoDrift to defend their Rally America Super Production title. Lauchlin O’Sullivan and Scott Putnam will head to Michigan for the only planned snow event of the season at the end of January.
The eight event Rally America National Championship travels to 7 states over the course of the season, with SnoDrift the traditional kickoff. SnoDrift is unlike the rest of the championship as it is planned to be on snow. The forecast for rally week is for new snow leading up to the rally and temperatures with highs above freezing during the competition. Traditional rally tires are not an option. CPD, and the rest of the competitive field, needs to plan for the ever changing and challenging conditions. Snow and ice tires are a necessity, but which will be best is a gamble.

“SnoD
rift is a great event, one of my favorites.” California native O’Sullivan said. “Road condition and tire selection are very important. We’ve got a lot of experience there but we are keeping the end of the rally in mind. We can get a great start to the season, but have to be smart. I have the SP championship in mind.”

CPD Racing USA won’t be the only team keeping an eye on the weather and stocking up on tires this month. Subaru Rally USA is bringing Bucky Lasek, X Games and Red Bull Global Rally Cross medalist, to compete in the Super Production class as well. 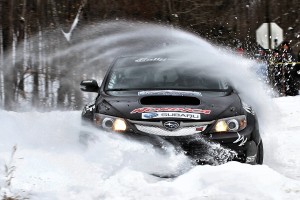 Lasek is a new addition to stage rally. David Higgins, 5 time Rally America Champion, will be sitting out of the drivers seat at SnoDrift and acting as an advisor to Lasek. Higgins knowledge of the SnoDrift roads will be a great advantage to the new SP team.
“Bucky is a great addition to the class. We’re excited to be able to compete with him at SnoDrift.” Putnam said while preparing for the event. “Anyone who comes into rally and can raise the profile of the sport is a welcome addition. I’m looking forward to talking with Bucky and seeing how our teams match up.”

CPD Racing USA is entering the season fresh off a class win at the end of the season LSPR event. For 2016 the team will be supported by Lucas Oil,
Morrie’s Minnetonka Subaru, Racetech, Exedy, Method Race Wheels and Subaru.net. Lucas Oil has been the main sponsor of the team for many years allowing the nationwide championship to be possible for the team. With the addition of increased support from Morrie’s Minnetonka Subaru CPD once again has an eye on the Super Production title.

“Our support of the CPD rally team is a great alternative way to reach our customers and be a part of what drives our Subaru fans.” Morrie’s Subaru General Manager David Miller said. “We are excited to be a part of their 2016 championship run and will be following the team all year.”

SnoDrift will take place in the northern half of Michigan’s southern peninsula over 120 stage miles January 29th and 30th. Follow CPD Racing Team USA on Facebook for updates throughout the rally week.

CPD Racing USA is a rally team located in the Minneapolis, Minnesota area. In 2012 and 2015 CPD Racing driver Lauchlin O’Sullivan and co-driver Scott Putnam won the Super Production championship. The team is supported by a small group of mechanics led by Graham Evans.