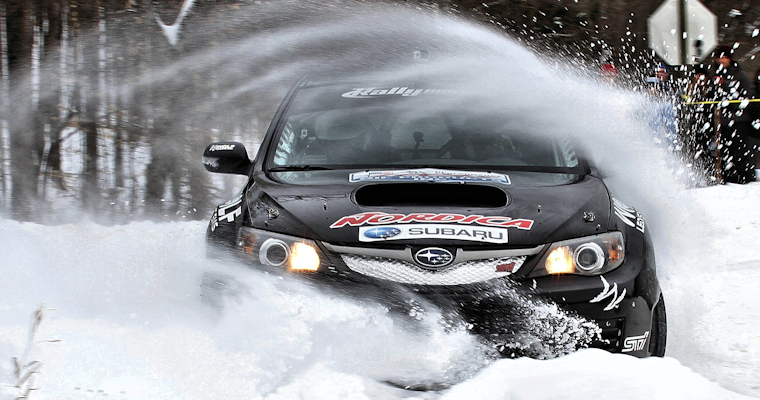 The question every year at Snodrift is, “What will the road surface be like?”

I have been competing in this event off and on since 2002. There have been numerous years where the roads have been icy, but the year that sticks out in my mind is 2015. It rained three days before the event and froze, and then never melted. Sketchy would be a polite description of the conditions. Friday evening they would have been described in more profane terms.

“We’re supposed to be an intelligent species. But look at what we’re about to do. We’re going to take a 3300-pound car and go down a road that is a sheet of ice. Just as fast as we can go. With trees close by on both sides of the road. What’s wrong with this picture?” This was my comment to my racing partner and driver, Lauchlin O’Sullivan, about halfway through recce.

To make matters worse, the vehicle we were racing had just been purchased and had resided in the southeast portion of the U.S.. The throttle on this car had been tuned to be either 0% or 100% with no real in-between. This would work admirably on a gravel stage, but not so well on pure ice where more than a bit of finesse was needed. No ability to feather the throttle there.

We spun out three times on the first stage alone. There was literally no traction and the driveline immediately went to full throttle the moment you touched the gas.

A few stages in to the race, I saw one of the media guys. I said, “This is probably one of the few times that I’m actually having more fun than him,” pointing at Lauchlin who, by that point, was looking stressed out and was dripping with sweat. Lauchlin said later, “The car was darn near undrivable. The temptation was to park it and go hit the bar.”

In these types of conditions, slowing down can be an issue. On the Avery Lake stage, we approached a pacenote sequence of “crest slippy down 200 left 2.” That translates to, “there is a crest followed by 200 yards of steep downhill road that is extremely slippery, with a 90 degree left hand turn at the bottom.” It was pitch black outside and we were moving down this tunnel of light from the driving lights. Everything was glistening and shiny with the coating of ice. We crept over the crest at what felt like two or three miles per hour. Lauchlin hit the brakes and, with the surface being a polished sheet of ice, we slowly accelerated despite the fact that the brakes were locked up all the way down the hill.

I was in the right seat thinking, “This is interesting. How is he going to manage this?”

How did we slow down? Lauchlin bounced off the banks to scrub speed a number of times, finally slowing down so we could slither around the left 2 at the bottom of the hill. Whew!