It’s No Joke: Subaru is Developing a Flying Motorcycle

As Motorcycle.com recently spotted, Japanese automaker Subaru has filed patent applications for a flying motorcycle. The patents describe a land-and-air vehicle that is essentially a motorcycle enclosed within an aircraft fuselage with vertical takeoff and landing (VTOL) capabilities.
Both patents describe a similar vehicle, one that can travel on the ground like a motorcycle and, when required, can lift off the ground and fly like an aircraft. The whole thing still sounds like complete science fiction, but a company like Subaru actually has the expertise to turn it into reality. While most people think of it as a car company, Subaru is also heavily involved in the aerospace industry, producing helicopters and unmanned aerial vehicles for the Japanese Self Defense Force while also producing parts for Boeing’s 777X airliner. Read more… 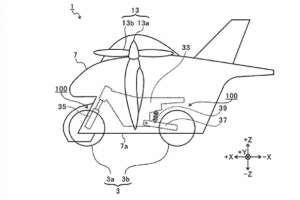 Five most-watched US crash tests of 2022

The peak body for new-car crash tests in the US has released a compilation of its most-watched videos from 2022.… Read More →