15 Things You Forgot About The Subaru Impreza 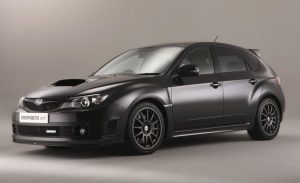 The Impreza is, in large part, responsible for the boom in younger people in the early 2000s getting into JDM (Japanese Domestic Market) cars. It was the first highly desired JDM car to be sold here and it caused other manufacturers like Mitsubishi to follow suit and start offering similarly equipped vehicles. Since those early days, the Impreza has spawned almost nothing but excellent editions that allow you to enjoy speed and handling at a… Read More →

It’s the middle of Betws-y-Coed late on a Wednesday morning of Rally GB week and Sebastien Ogier is waiting patiently in traffic. Curiously, the six-time World Rally champion is moving through this most beautiful of Welsh towns totally unmolested. Nobody’s given him or his motor a second glance. Let’s face it, in this rally friendly part of the world, there’s nothing enormously unusual about a bloke wearing a Citroen T-shirt driving a dirty-white Subaru WRX… Read More →

On National Drive-Thru Day, the Subaru Ascent Is Cupholder King

The all-new 2019 Subaru Ascent is a solid return for the brand to the three-row SUV class. In addition to familiar styling that still adheres to the automaker’s design language found in its popular smaller SUVs/wagons, the Ascent upholds Subaru’s time-honored tradition of safety, practicality and affordability. Its interior quality stands out, its noise-canceling abilities are at luxury-class levels, and its standard all-wheel drive and EyeSight safety suite make it a competitive entrant to an… Read More →

First Drive: 2019 Forester Is Every Bit As Good As Subaru Said It Would Be

We’re sure there are a lot of apprehensive Subaru fans reluctantly reading this new Forester drive report, disappointed to learn that the Japanese company has ousted the model’s 6-speed manual and turbo from the latest version while taking a conservative approach with its all-new restyling and adding a mild hybrid specification. But there is hope. The new 2019 model we drove at the Izu Cycle Sports Center south of Tokyo last week is better than… Read More →