We’re halfway through the 2015 American national rally championship calendar. The Olympus Rally this weekend in Shelton, Washington is one of the bucket list events in the championship. 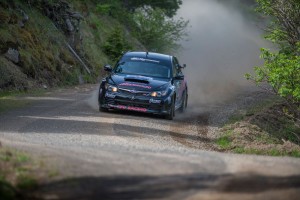 In fact, The Olympus Rally was part of the first US Rally Championship in 1973. Gene Henderson and co-driver Ken Pogue were the inaugural winners in an AMC Jeep. Olympus later became a World Rally Championship event from 1986-1988. Rally legends John Buffum, Rod Millen, Hannu Mikkola, Markku Alen and Juha Kankkunen have all won there over the years.

It’s on these historic lumber roads that the 2012 Super Production (SP) championship team of driver Lauchlin O’Sullivan and co-driver Scott Putnam will look to build on a points lead captured after a win last month at the Oregon Trail Rally. O’Sullivan said he has great memories of the roads at Olympus. 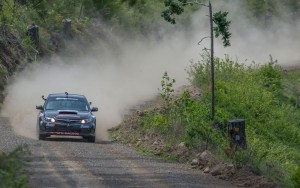 “I remember working a World Championship event with my Dad and sister. I got a chance to see all of my heroes out on those roads.” O’Sullivan said he hopes to see those roads again during this year’s event. “Those are more of what I remember 20 or 25 years ago; all the Weyerhaeuser roads back then.

From 2009-2011, the Olympus Rally moved to Ocean Shores, WA on the Olympic Peninsula. Some of the best images from the rally had the Pacific Ocean in the background. The roads this year, however, will be more inland at the southern end of the Puget Sound.

“We’re three points ahead of Garry Gill who’s having a great year with three podium finishes in the first three rounds,” said Putnam. Gill, an emergency room doctor from India by way of Tennessee, won a round in Missouri in February. He wasn’t expected to challenge for the championship this year but there he sits just three points behind O’Sullivan and Putnam going into Olympus. Staying that close might be a problem, though. Gill wasn’t listed in the Olympus entry Wednesday night. The event starts Saturday.

The team that was expected to fight for the title, 2013 Rookie of the Year Nick Roberts from Minnesota and his co-driver Rhianon Gelsomino from Australia, has had problems all season. Their only finish of the year was a win at the Sno*Drift Rally in Michigan last Janary. Two DNFs since then has them 32 points behind O’Sullivan and Putnam at the halfway point of the season. 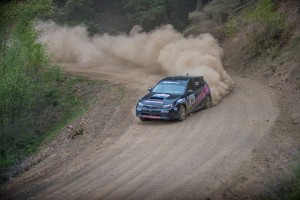 “The idea is to play defense with a good offense,” O’Sullivan said. “If you kind of sit back and hope for a second or third place you don’t win a championship like that.” O’Sullivan said the plan would be to go out and push at the front and see where everyone is. “If we need to push harder we can do that too.”

The team emerged from the Oregon Trail Rally last month with no problems in their 2009 Lucas Oil/Wolf LED Rally Team Subaru WRX STI. The car was stored in the Northwest while the team returned to San Francisco and Minneapolis where O’Sullivan and Putnam live. It was pulled from storage this week and refreshed for Olympus this weekend. O’Sullivan and Putnam haven’t been at the last two Olympus events.

“The last time we were there was in 2012 when we won the championship,” Putnam said. The team won the Super Production category at Olympus in September of 2012 on their way to the title. Does O’Sullivan feel the team has that kind of momentum headed to Olympus this weekend?

“I think it’s going to be a fun event,” O’Sullivan said.

The roads at Olympus are unique to every other rally in the championship. There’s snow and ice at Sno*Drift in Michigan, high speed gravel in Missouri at the 100 Acre Wood Rally and variety including racetrack pavement at the Oregon Trail Rally last month. Olympus is known for mountains and heavy forest roads with exposures (dropoffs). Roads used in the past were culled from tree farms on steep hillsides where heavy forest might be mixed with clear cut where the trees have been harvested for use.

The Olympus Rally, May 16-17, is the fourth round of the national rally championship. The roads have plenty of “gotcha” or surprise moments for competitors.