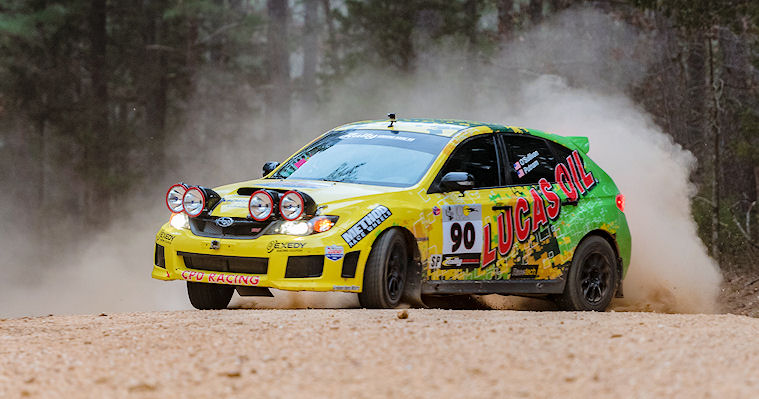 The Rally in the 100 Acre Wood. Open and flowing with a few tight, twisty stages thrown in. This year’s event features some of the fastest stages in the American Rally Association (ARA) series. Conditions can vary widely during this event, the range being from clear, sunny and 70 degrees, to the solid sheets of ice and snow of a true winter event.

Coming into the rally this year, the weather has been drier. Last year’s event featured torrential rainstorms the week before the event and was wet, with raging swollen streams, amid the pandemic to boot. The water splashes were deep and vast. I have never been to a rally that claimed so many cars due to water crossings. Coming out of the water splashes, one would see two to four cars parked due to water getting somewhere it shouldn’t be.

That was actually a year that the tortoise finished ahead of the hare. During the recce, some of the river crossings were so deep that the water actually came up over the hood of the car. Our rally car (CPD4) does not seem to care for the mix of deep water and high speed. My son, Spencer, and I took it easy through the deep water and kept chugging along. Often times, water would still hit the air filter element causing the car to sputter and threaten to die. The filter eventually dried out, resuming its normal function. This did not make for flashy or spectacular water crossing pictures, but we kept going. When the plaque for 3rd place in class was given to us it was a pleasant surprise.

We got to look at the stages today on recce. This year looks to be drier, at least until it begins raining on Friday. Friday’s stages are fast and flowing, and are up in the Potosi area. The wet, potholed and nasty parts are still there on the Saturday stages southeast of Salem. These rough, rutted portions, with holes filled with water and deep mud, are a challenge even in drier conditions. They will get much worse as it rains. Dodging car parts such as bumper skins can also be part of the repertoire.

Finishing this event is always an achievement-