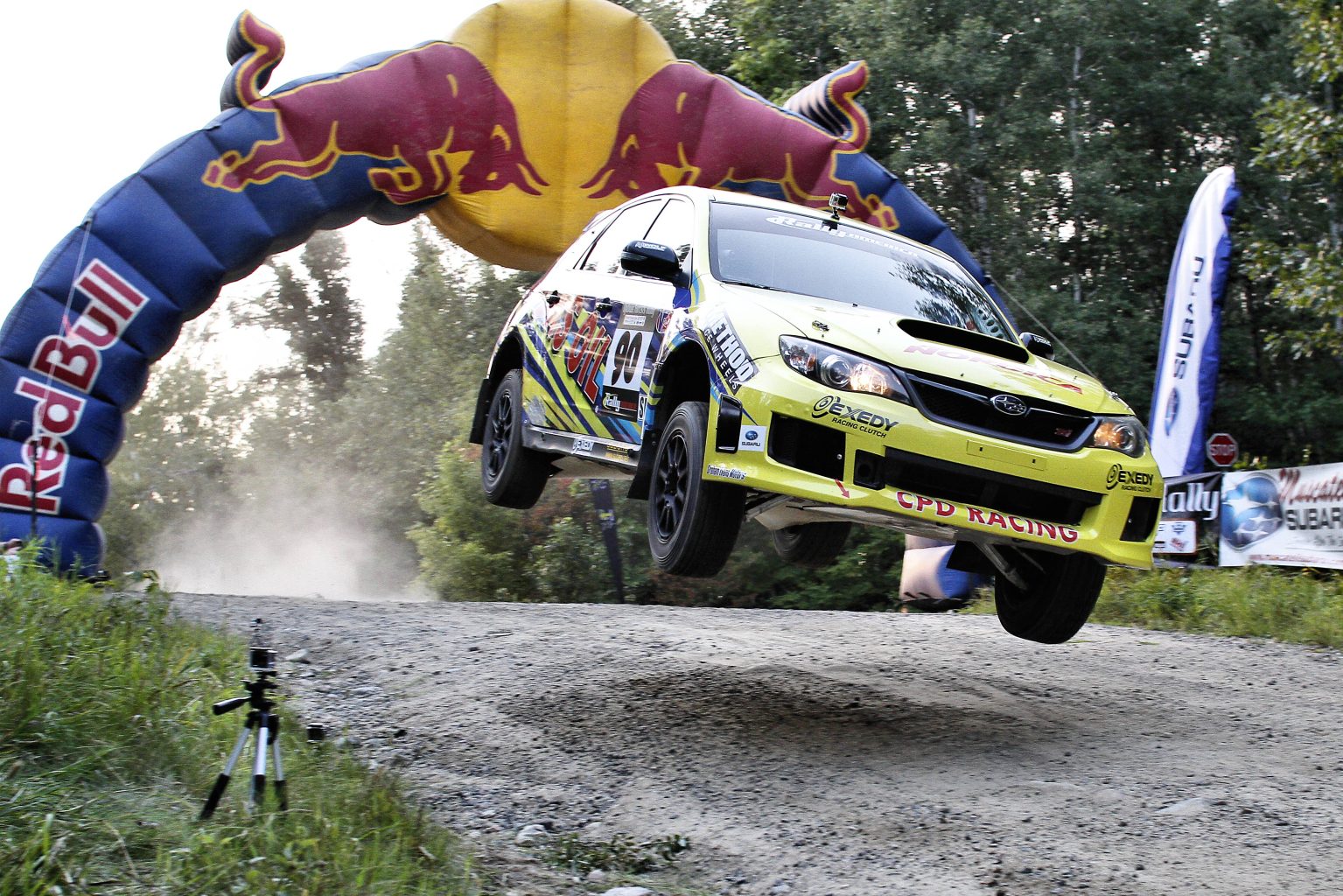 Crossroads is Ojibwe Forests Rally’s first stage and is most well known for its jump. At 10.5 miles long, the stage is of medium length with three distinct sections. This year’s race start is at Gladen Construction, with a 16-mile transit heading south to the stage. A leisurely cruise out, the tension will build a bit as you approach the left turn from Hwy 64 into the stage. You descend to the initial time control and take your spot in line. Until you hit the jump, you are in a dark, dense forest that is always shady. In this type of forest, I am always reminded of the passage from a Robert Frost poem:

“The woods are lovely, dark and deep.

But I have promises to keep,

And miles to go before I sleep,

And miles to go before I sleep.”

After checking the tire pressures, you climb back in, plug in the intercom, and get ready for the start. While pulling your gloves on, your navvie is pulling their books out, and you set the center differential from the road setting to what works best for the road surface. There usually is a brief discussion on the characteristics of the stage, the first few corners and then anything notable.

You watch the cars ahead of you take off. Now it’s your turn to move to the start. After pulling up, the start control does their thing, and you have about 30 seconds before the light turns green. You flip the switches to turn on the anti-lag, set up the launch control, and settle in for the start. Four to five seconds before the start, you pull on the handbrake, the clutch goes in and throttle to the floor. RPM’s come up to 4500RPM with the antilag popping and blasting away. Ease the clutch back out a bit to pre-load the suspension, and the car crouches as if getting ready to leap. You blast off and you both try to get dialed in as quickly as possible. Even if wet, the surface here is usually good and grippy. The road at this point is shaded, with narrowish 3’s, 4’s and 5’s eventually leading up to the crossroads jump which is about a 1.5 miles in.

The sequence over the jump kinda goes like this:

You go around the R5 and are greeted with the 150 leading to the jump. This is a long uphill stretch where you break out into brightness as you are approaching and going over the jump. Coming up to the crest, you can’t see what is on the other side. There might be second thoughts as to how fast you actually want to tackle this jump. There is a L5 immediately as you land. Depending on your speed you might land in the L5. The trick here is to decide, while performing recce the day before, precisely what your line and speed will need to be on race day. And even then sometimes you don’t get it right. Coming over the jump last year, we were greeted by a car off in the woods immediately to the left. They obviously didn’t get it right. I ran this for many years before I discovered there was a large pond immediately to the left, so if you really screw up, you may go swimming.

After landing, the road gets about 20 percent wider, and is more open and brighter for the next XX miles. The surface is looser, sandier and faster. It alternates between sections of flowing 4’s and 5’s with periods of tighter 3’s thrown in. Last year it rained for the five days prior to the event. This stage was run twice. After repeated usage this portion got torn up at times and we ended up dodging large rocks that were pulled up on the road.

Around the 6.5 mile mark, there is a turn L2 onto Parkway Forest Rd. The road opens up with predominately 5’s and 6’s with commensurately higher speeds. Dust will often become a factor here, especially on the second pass. If it’s not windy, the dust will hang in the air, severely limiting visibility and reducing speed. At the end of this section there is a long straight in an open area where you then dive back into woods.

At the 7.5 mile mark is a turn R2 onto Kabekona Forest Rd for 3 miles of technical twisties. The road narrows here and becomes predominately 3’s to the end. This plays to the strength of our rally car, CPD4, which is tuned for low end torque. With the required 34 mm restrictor, there is only so much air you can get into the motor and, above 5,000 RPM, the power starts to go away. The motor is tuned so you have massive amounts of power and torque is down low. You can attack the 3’s and it will power and claw through through them like a champ. Great fun! There are a couple of spots where you have to be tidy due to a tree or two on the outside. Occasionally, the setting sun can put a damper on things if you are unlucky enough to have it shining in your eyes. Again, this will slow you down. You hit the finish, slowing into the time control. While the navvie gets your times, you are watching to see if the brakes are on fire. If they are on fire, you can’t dilly dally at the control, and you must promptly head on down the road to blow the fire out and cool off the brakes. There usually is a short transit to the next stage, so on to the next one you go.

Born from the Subaru and Toyota Collaboration, the Subaru BRZ and the Toyota GR 86 began modestly in the first… Read More →

The sensational new Subaru BRZ fielded by Olly Clark, son of rally legend Roger, did not make it into the… Read More →